Between Commedia and Neoclassicism

DON JUAN: What! would you have a man bind himself to the first girl he falls in love with, say farewell to the world for her sake, and have no eyes for anyone else? A fine thing, to be sure, to pride oneself upon the false honour of being faithful, to lose oneself in one passion for ever, and to be blind from our youth up to all the other beautiful women who can captivate our gaze! No, no; constancy is the share of fools. Every beautiful woman has a right to charm us, and the privilege of having been the first to be loved should not deprive the others of the just pretensions which the whole sex has over our hearts. As for me, beauty delights me wherever I meet with it, and I am easily overcome by the gentle violence with which it hurries us along. It matters not if I am already engaged: the love I have for a fair one cannot make me unjust towards the others; my eyes are always open to merit, and I pay the homage and tribute nature claims. Whatever may have taken place before, I cannot refuse my love to any of the lovely women I behold; and, as soon as a handsome face asks it of me, if I had ten thousand hearts I would give them all away. The first beginnings of love have, besides, indescribable charms, and the true pleasure of love consists in its variety. It is a most captivating delight to reduce by a hundred means the heart of a young beauty; to see day by day the gradual progress one makes; to combat with transport, tears, and sighs, the shrinking modesty of a heart unwilling to yield; and to force, inch by inch, all the little obstacles she opposes to our passion; to overcome the scruples upon which she prides herself, and to lead her, step by step, where we would bring her. But, once we have succeeded, there is nothing more to wish for; all the attraction of love is over, and we should fall asleep in the tameness of such a passion, unless some new object came to awake our desires and present to us the attractive perspective of a new conquest. In short, nothing can surpass the pleasure of triumphing over the resistance of a beautiful maiden; and I have in this the ambition of conquerors, who go from victory to victory, and cannot bring themselves to put limits to their longings. There is nothing that can restrain my impetuous yearnings. I have a heart big enough to be in love with the whole world; and, like Alexander, I could wish for other spheres to which I could extend my conquests.

A comedy with a tragic end, if we take DJ as a hero. Anti-hero?

[ make a new poll ] The Cast & Crew must subscribe to eGroup: Comedy & BM

Christianity and Sexual Revolution -- naked man on the cross! God as man, body (but under control of mind) -- weak individual will needs "group support" (church). Nevertheless, sexuality is recognized and aknowledged. Not only the procreation, but the sexual desire (commendments).

Misanthrope and Other Plays, The : A New Selection (Penguin Classics) The Misanthrope, Moliere's richly sophisticated comic drama is accompanied in this volume by The Would--be Gentleman, another tale of a dangerously deluded and obsessive hero. Tartuffe dares to take on the subject of religious hypocrisy. Also included are Such Foolish Affected Ladies and Those Learned Ladies, both newly translated for this edition. Finally, The Doctor Despite Himself is a hilarious example of Moliere's long-standing vendetta against the medical profession...

* What other characters (besides Death) should I introduce on stage? ...

Although never having seen the entire show, I thoroughly enjoyed what I have seen of it. (Often from the wings or peeking through a hole in the curtain.) While I was on stage I never had more fun interacting with, and yes watching the other actors. It was hard not to laugh while sitting in the wings (or sitting on someone.) This is a combined review because IˇŻm just too tired, and confused to write a separate review for acting, and directing, while pretending not to be the actor who was directed. So here is a really long overview of the things I saw, liked, and hated.

Starting with the opening scene between Sganarelle and Gusman the audience was immediately engaged. The dances (and I am not saying anything about the quality of the dances themselves) were manipulated to add to instead of detract from each scene. At first I thought having the two actors on the balcony at the same time as the dance would distract people, I later noticed how the dancers were acknowledging the presence of the actors and it all just seemed to blend. In my own mind, it seemed believable that these two fellows were on the balcony of some bar in Spain maybe, and they noticed some peasant women having a dance down by the town fountain. This directing choice worked well for me.

I really enjoyed what Jon W. And Andrew C. came up with before the script even began. I don't think Jon was ever told to use the phone book in any way other than as a prop bible, and I think his comments on dentistry won the audience over every night. Within the first five minutes of the show, the audience knew they were allowed to, and required to laugh out loud.

The transition scene with the two brothers on horse back, and Dona Elvira following crying was a good way to introduce the brothers and show that they were being sent off to avenge the wrongs done against their sister. But the scene always lacked clarity. The added transition scenes, this one, the drowning scene, I would say needed direction with a firmer hand, preferably while holding a blunt object. Since there were no rules or guidelines for these transitions, they got a little out of hand. The comedic timing was totally lost in the brother/sister transition. (As Elvira, I knew this, and still couldn't save it. At moments like that I prayed for direction for myself and fellow actors.)

The incorporation of Don Juan and Dona Elvira (OK, I guess I will talk about myself.) in the second dance (the Bull Fight) seemed like a good way to show the game between Don Juan and Dona Elvira, but it was never developed enough. (I think Dona Elvira felt stupid while miming the dancers.) Like with everything else, if there was only more time to work out the choreography it could have been very funny, and added to the audience's comprehension of the play. The dancers dabbled in acting during this dance, when each night I saw them engaging the audience more and more with slight gestures and innuendos.

The clowns deserve big kudos for taking the brunt of any and all the audience's discontent with the actors. I would have been terrified if I received direction to "Go and make them laugh!" Bo and Charlie flopped a few jokes, but for the most part kept the audience engaged during transitions and moments of awkward silence. (Yes, there were a few.) My only suggestion would have been to buy them a joke book (simply for inspiration), or get them drunk every night. (Because we all love Drunken Bo.)

So, my point is the dances gave the show some variety and some much needed femininity (cleavage), the improve was witty and sharp, and the technical aspects of the play were simple but effective in conveying the messages of time and location. But, as far as the direction of the actors maybe the reign should have been pulled in on a few places. I got a little annoyed myself when one scene went on five (or ten) minutes longer than it should have because the improve (although side splitting) was never given limitations. I was so impressed by the cast members for reaching what I once thought was an unattainable goal, and for making something out of nothing. Meaning, what Mike K. did to the father scenes. I never thought they were funny, and by the end they were the scenes I always looked forward to listening to. The attitude Chip gave DJ, made him such an attractive, and funny character it made me giddy! (My favorite line: "You're not drowning in there, there's no water!") Way back when, after reading the play I thought, "What a bastard!" after watching (hearing) the show I really saw the attraction in the DJ character, and yes, pitied him to. He is alone, and rejects the only women who really loves him (yes, I think Elvira really did.) and for all his belief in a higher power he gets sent to hell. DJ really is a tragic character behind all the humour, bravado and flare. I think the battle between God and DJ was understood by both Chip and Anatoli, and I understood it better because of them.

This play was a success, flawed, but that's why I love it. I remember thinking three months ago, "What the hell am I getting into?", and honestly didnˇŻt know if the show would make it. It is the least to say that it has surpassed my hopes, I have gained richly from the experience of working with cast, crew, and director. This review does not give due credit to everyone in DJ, and associated with it, I only hope it gave some analytical insight from my point of view.
-Rose Jensen

DJ Master-File (research, notes, readings) is [ was ] in THR Office! 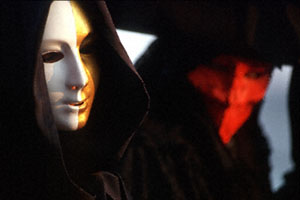 MASCARILLE: Your love is like porridge, which by too fierce a fire swells, mounts up to the brim, and runs over everywhere! Everybody might have seen it. At table, when Trufaldin made her sit down, you never took your eyes off her, blushed, looked quite silly, cast sheep's eyes at her, without ever minding what you were helped to; you were never thirsty but when she drank, and took the glass eagerly from her hands; and without rinsing it, or throwing a drop if it away, you drank what she left in it, and seemed to choose in preference that side of the glass which her lips had touched; upon every piece which her slender hand had touched, or which she had bit, you laid your paw as quickly as a cat does upon a mouse, and you swallowed it as glibly as if you were a regular glutton. Then, besides all this, you made an intolerable noise, shuffling with your feet under the table, for which Trufaldin, who received two lusty kicks, twice punished a couple of innocent dogs, who would have growled at you if they dared; and yet, in spite of all this, you say you have behaved finely! For my part I sat upon thorns all the time; notwithstanding the cold, I feel even now in a perspiration. I hung over you just as a bowler does over his ball after he has thrown it, and thought to restrain your actions by contorting my body ever so many times!

[ THE BLUNDERER, A monologue from the play by Moliere. This translation by Henri van Laun was first published in The Dramatic Works of Moliere. New York: R. Worthington Publishers, 1880. It is now a public domain work and may be performed without royalties. ]