Scenes and monologues are on acting and directing pages...

Read "The Importance of Being Earnest"

Virtual Oscar: I intend to direct Wilde in the Style of the Biomechanics: everything choreographed as if the characters watch themselves in the mirrors, walls as mirrors (we have cameras and big screens on stage). "Romance with myself" -- said Nuriev. Also, Life as Art. Art of Living. Not a behavior, but a performance. Sometimes they become the images on the screen only (see the Director's cut of the play). Sometimes the images (reflections) have their own independent life! When they disapear?

The End. Only the images are left, the live actors are gone. Brecht? The actors watching the characters who live on the screen (Pirandello).

What about the prop?

To get the sense of "genderless" world, I would do a Shakespearian trick; all male cast. Very risky.

The writer of the comedies had no happy end in his own life. "One should either be a work of art, or wear a work of art," wrote Wilde and the famous motto "Art for Art's Sake" was his life. In 1895 after the opening of "The Importance of Being Earnest" Oscar Wilde was arrested, tried and sentenced to hard labor for "indecencies" -- he was gay. He came out of prison only to leave England and die.

"I am working at dramatic art because it's the democratic art and I want fame." And he had it, the fame. "The importance of Being Earnest," is considered the most perfect of modern comedies So perfect that he even found a way mocking the conventions of melodrama, his own genre. Well, Wilde saw life as performance and treated the world as a figment of his imagination. "The destiny of me," he wrote. Oh, his comedies are not just funny, they are serious, if you dare to notice it. Perhaps, he can help us to have a comic look at the serious matters of celebrating of individualism today in America.

"The English have really everything in common with the Americans, except of course language..." To stage Wilde is to learn it, the language. We try to do it in our, American way, this production is another show at UAF in developing new medium of Virtual Theatre. What is vTheatre? Come and see it!

Turn of the century: Wilde and Chekhov

I use WWWilde Forum for Fundamentals of Acting class (Fall 2002). [Maybe the whole play at the end for finals.]

Scenes and monologues in class ("The Importance of Being Easnest" as a showcase). "Actor's text" samples. Where is the magic line between drama language and performance?

Scenes and monologues from the play are used for Acting and Directing classes (comedy as genre).

Start with the dramatic analysis!

Self-made Man, according to Oscar Wilde : "I am my own masterpiece!"

... concept [ description ] Personal Life as a material for creativity.

"I was a man who stood in symbolic relations to the art and culture of my age... The gods had given me almost everything. I had genius, a distinguished name, high social position, brilliancy, intellectual daring; I made art a philosophy, and philosophy an art: I altered the minds of men and the colour of things: there was nothing I said or did that did not make people wonder... I treated Art as the supreme reality, and life as a mere mode of fiction: I awoke the imagination of my century so that it created myth and legend around me: I summed up all systems in a phrase, and all existence in an epigram." @1998-2001 script * Fall 2002 THR215 Dramatic Literature: subscribe to DramLit Forum * * 2008 : directing: StageMatrix & acting: BioMechanics *

The only way to get rid of a temptation is to yield to it. [ The Picture of Dorian Gray ] 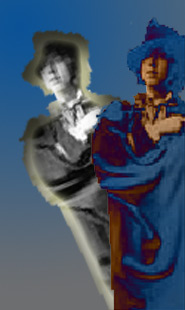 How small is the place we explored so far! From oedipus to Earnest (bag and fate) to Rosencratz and Guildenstern (ID, creation of Self and other PoMo issues). And the true artist breaks new grounds...